This is a light dessert full of flavour and nutritious fruits. This is a fantastic spring/summer dessert and can be prepared and chilled in advance so makes a great dinner party or BBQ treat.

Here’s what you will need for one dessert: 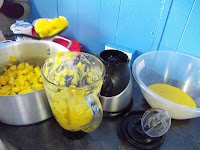 First remove the flesh of the mango and blend until smooth. 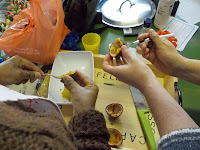 Halve the passion fruit and remove the seeds.

Zest and juice the orange.

Then mix the mango puree, orange juice and zest and greek yoghurt together. 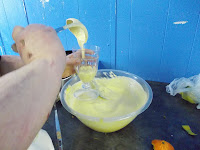 Pour the mixture into individual dishes and place the passion fruit on top of the fool.

Then chill for at least 45 minutes and serve when ready. 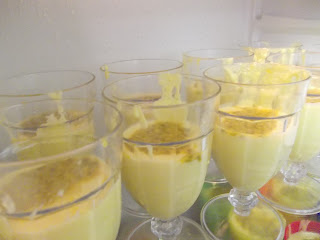 The group really enjoyed this dessert and were surprised how good it tasted without any added sugar and all natural ingredients.

Chicken Kebabs are really easy to make and you can incorporate loads of different vegetables depending on what flavours you prefer. 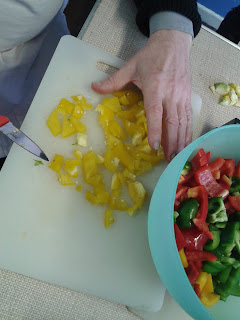 We used:
Chicken
Red Peppers
Green Peppers
Yellow Peppers
Onion
Wooden Skewers
And for a dressing for the kebabs:
Garlic
Olive oil
Soya Sauce
Balsamic Vinegar
First of all soak the wooden skewers in water for at least 45 minutes so they do not burn in the oven.
First we chopped all the vegetables and chicken into similar size bite size pieces ready for the skewers. 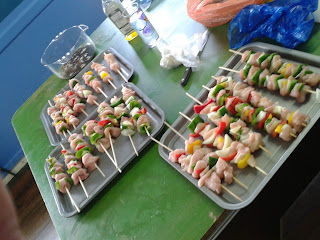 Then everybody prepared they’re own two skewers in which ever way they wanted.
For the dressing we crushed a few cloves of garlic and mixed the olive oil, soya sauce and Balsamic vinegar together, then poured this mixture over the Kebabs.
Cook these in the oven or under the grill for 20-25 minutes
The coconut rice is easy to prepare and makes a change from plain boiled rice.
When cooking the rice just add in a tin of coconut milk and a couple of tbsp’s of shredded coconut and boil until the rice is cooked through. 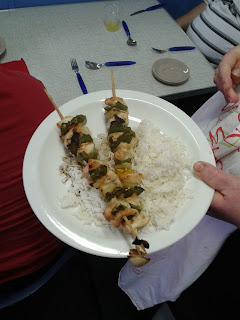 We decided to make our own bread rolls for our starter, however bread can take a long time to prepare so we found this recipe, which claims we can make bread rolls quickly!

Here’s how we did it:

First we mixed the milk, hot water, sugar, yeast and butter together until the yeast has dissolved. We then left this to stand while we sieved the flour and salt into a separate bowl. 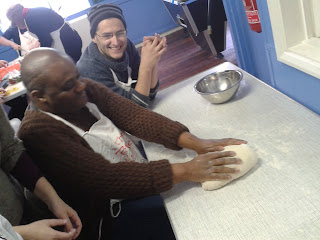 We then added the combined the two mixtures and began to kneed.

Kneed the bread until smooth and stretchy.

We put the dough in a bowl and covered with cling film and left it to rise for 15 minutes. 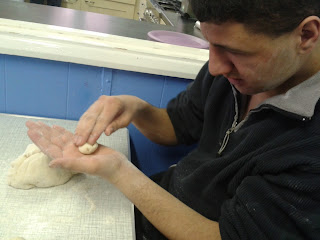 We then separated and shaped the dough into rolls and placed them into greased cake tins, covered with cling film and left to stand for a further 15 minutes. 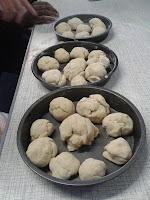 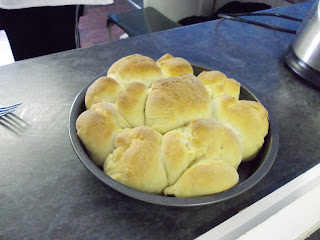 Then bake in the oven at 200 degrees for 10 minutes or until Golden brown.

The rolls turned out great, they were soft and fluffy and great for a starter.