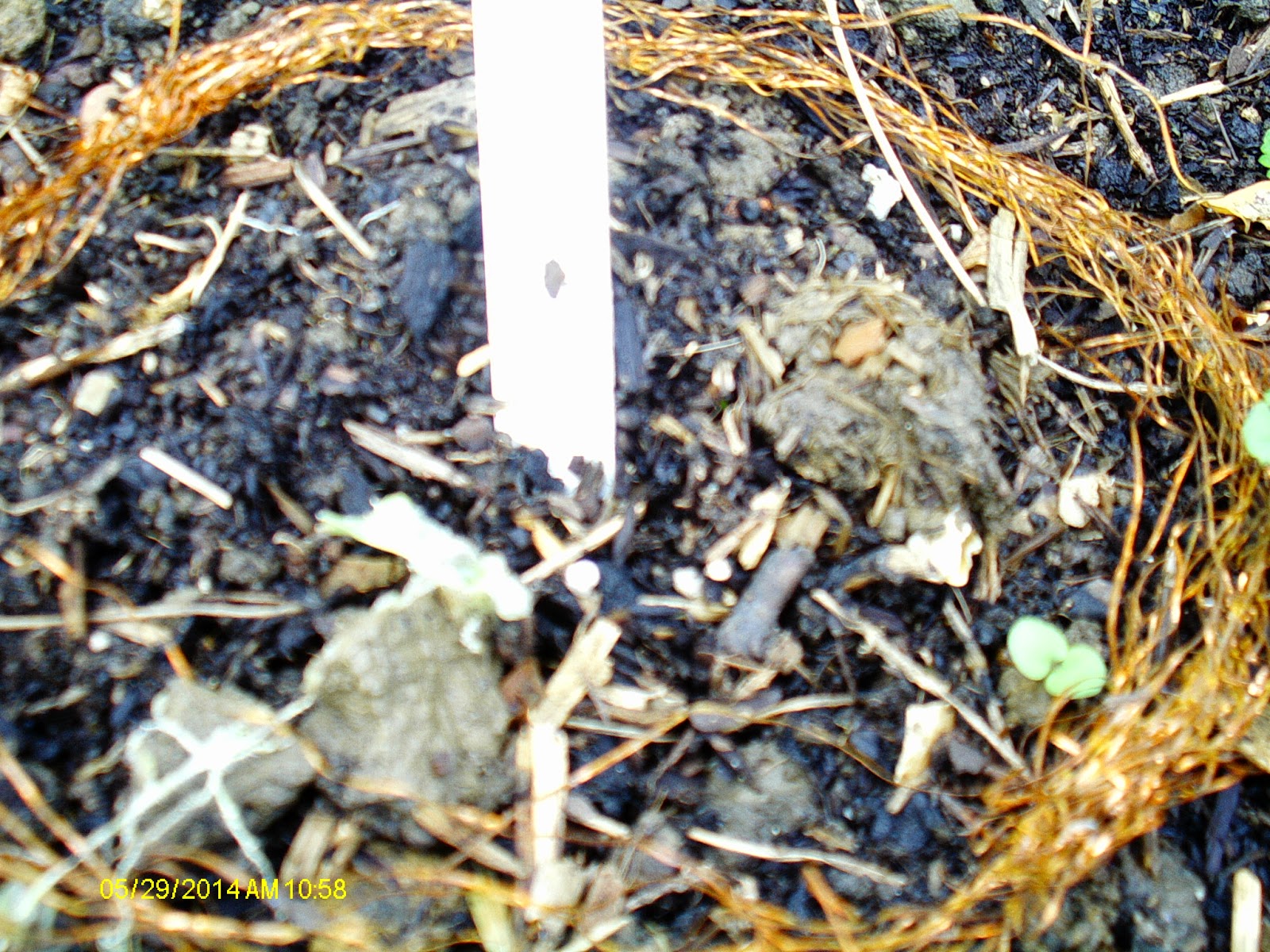 The butternut squash we planted have been eaten by snails and slugs!  Not even a tiny bit left, but most of the beans and sweetcorn have survived.  Some of the group went to the Garden Centre to buy a giant tub of slug killer, one that’s good to use with edible plants. 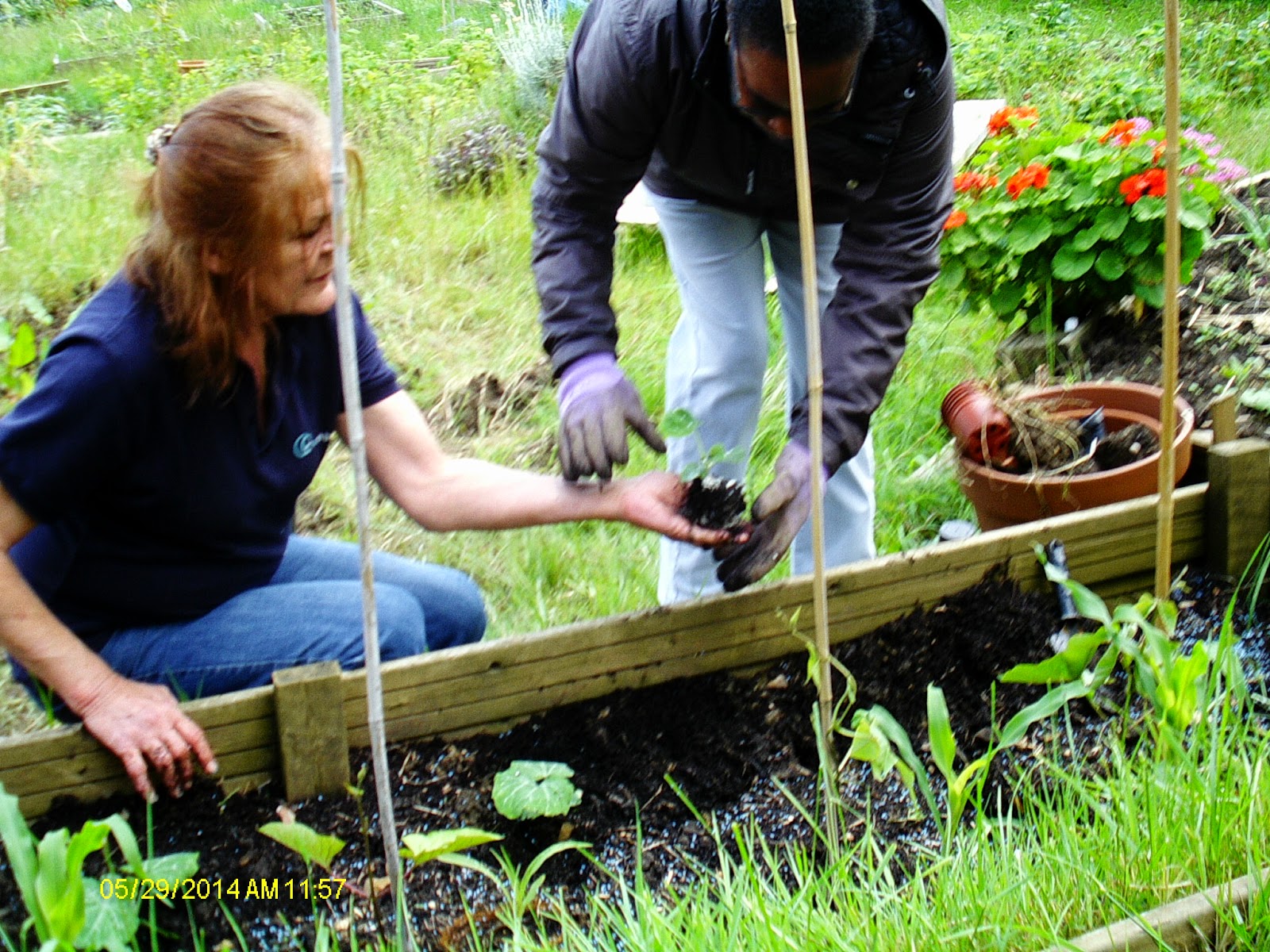 We earthed up the potatoes, which have been growing really well in their new raised beds. 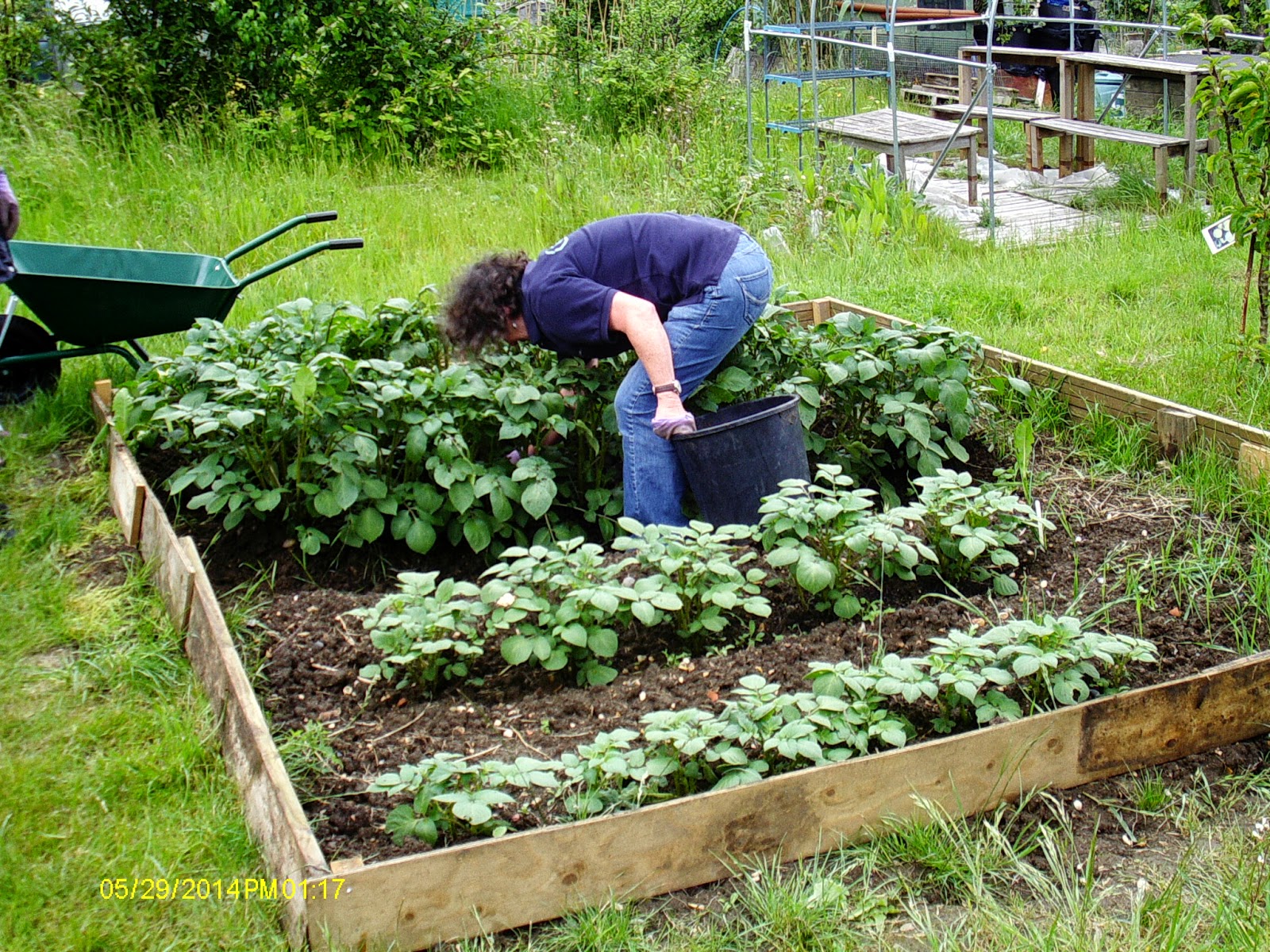 We’re making more raised beds this year as a lot of the compost we dug into the soil last year was washed away with all the winter rain. The soil on the plot is heavy clay and needs lots of organic matter dug in to keep the plants happy.
We did some digging and weeding on the top plot and just made it down the hill before the rain came, for a welcome cuppa in the Community Building.
We planted some more seeds to grow on in the shed, Mignonette and Dianthus,  some flowers which we may be able to sell at the Lambeth Country Show, and chili, purple sprouting broccoli, pak choi and dwarf french beans.  We also tried to make a cage of netting to protect the cherry tree from hungry birds, but it didn’t work as it was too windy. 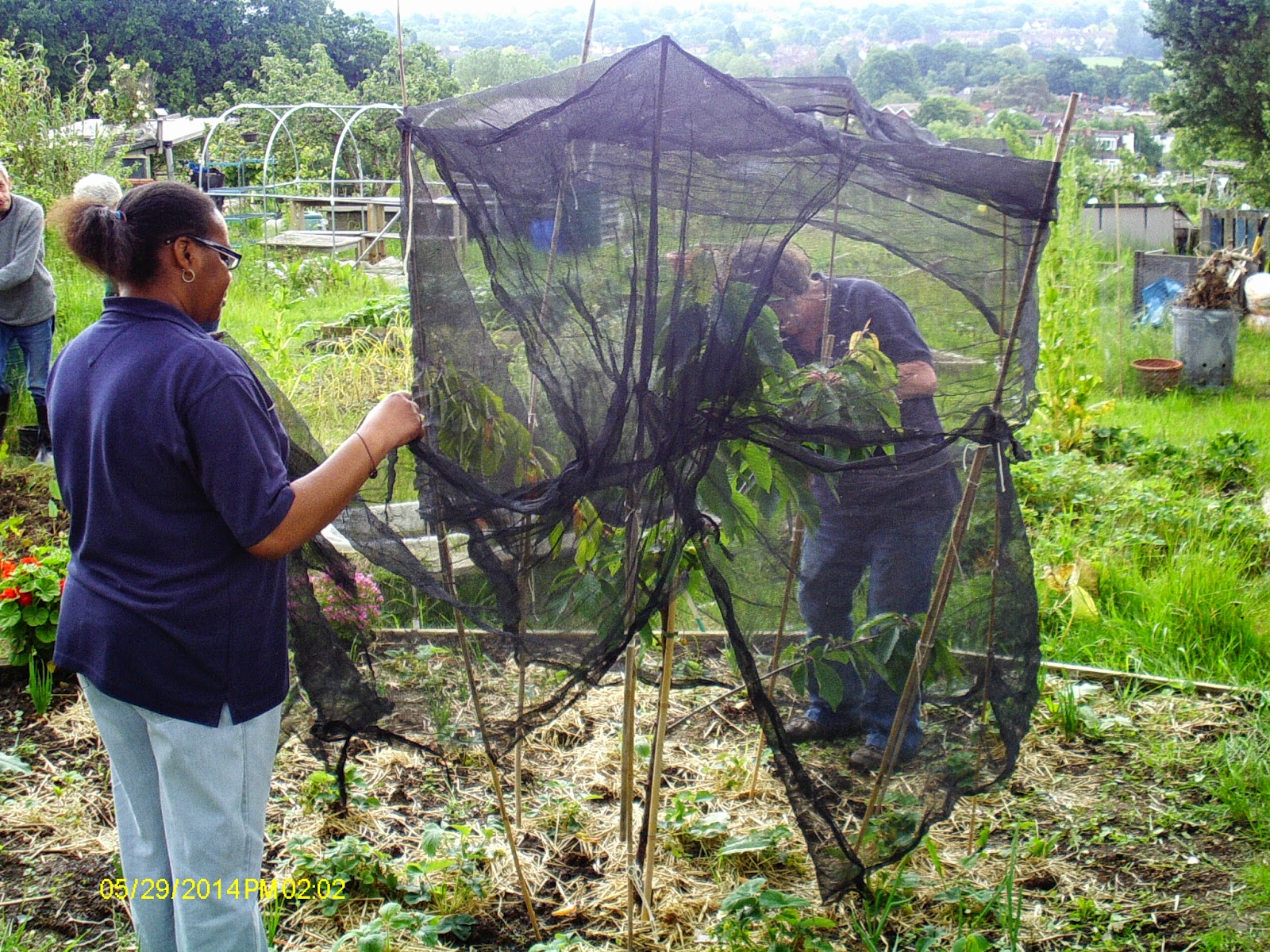 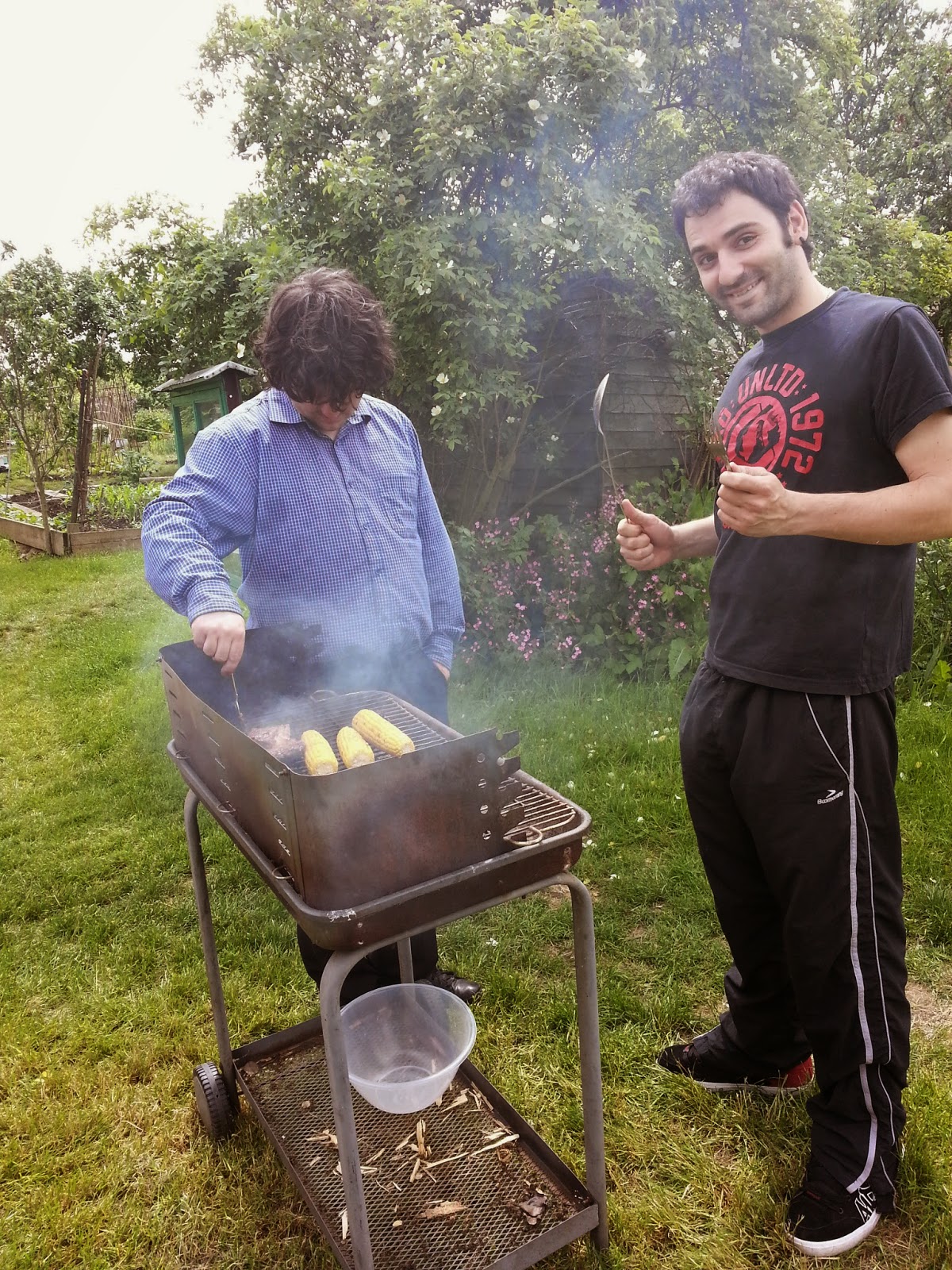 We planned to have a barbecue on the plot
but it was raining on and off all day, so we stayed around the Community building.  We were still able to cook our food and enjoyed the first barbecue of the season.

This Friday the group choose to go to the PECKHAMPLEX cinema to see ‘The Other Women’ staring Cemeron Diaz, Leslie Mann, Kate Upton, Nikolaj Coster-Walkdau, Nivki Minaj, Taylor Kinney and Don Johnson.
Before the film started the group brought some tasty snacks from the confectionery counter, the hot dogs seemed to be a popular choice.
‘The Other Women’ is about a women (Cameron Diaz) who tries to get her ruined life back on tract after discovering that her boyfriend is married. But when she accidentally meets the wife he’s been cheating on (Leslie Mann), she realises they have much more in common, and her sworn enemy becomes her greatest friend. When yet another affair is discovered (Kate Upton), all three women team up to plot mutual revenge.
After I spoke to the group to find out what they thought of the film, this is what they said:
“ Very Funny”
“I like the part in the restaurant when the women put a laxative in his water”
“It was brilliant”
“I enjoyed it, it was good”
“I liked it”
“It was good. my favourite bit was at the end when the man goes crazy and falls through the glass wall”
“It was funny”
“I thought is was funny when he had to wear the red trousers home from the restaurant”
“Really funny”
“Great”

Just to let you know I put an application in for Made 2 Dance to be part of Routes to the River as part of the Big DanceFestival. I am pleased to say that our application was successful J
Made 2 Dance will be performing  Routes to the River, a Big Dance 2014 event produced by Siobhan Davies Dance and Big Dance hub for South London.
Routes to the River is a trail of performances in green and urban spaces from Siobhan Davies Studios to the Southbank Centre on Sunday 13th July as part of Big Dance 2014. They will be a varied selection of groups/companies who will be performing alongside Made 2 Dance along the outdoors  trail. Each group will work independently to develop their piece with support from a professional choreographer from Siobhan Davies Dance. Routes to the River is a piece that will find connections between people and the natural world in an urban environment
It’s a fantastic opportunity for Made 2 Dance to learn choreographic skills around site specific work and work alongside other companies and choreographers and to be part of a national festival. We have also decided to integrate both our Old Library Dance group which is now named Bite Back Dance Crew to support Made 2 Dance throughout the process and performance.

The group found this recipe and thought it would be perfect for a warm summers day.

To make enough for four you will need:
400g Spaghetti
2 lemons (zest only)
3 large courgettes
bunch of parsley
70g Grana Padano (grated)
5 garlic cloves (finely chopped)
pinch of crushed chillies
olive oil
First we measured out the spaghetti and put it on to boil.
We then grated the courgettes, zest the lemons and chopped the garlic. 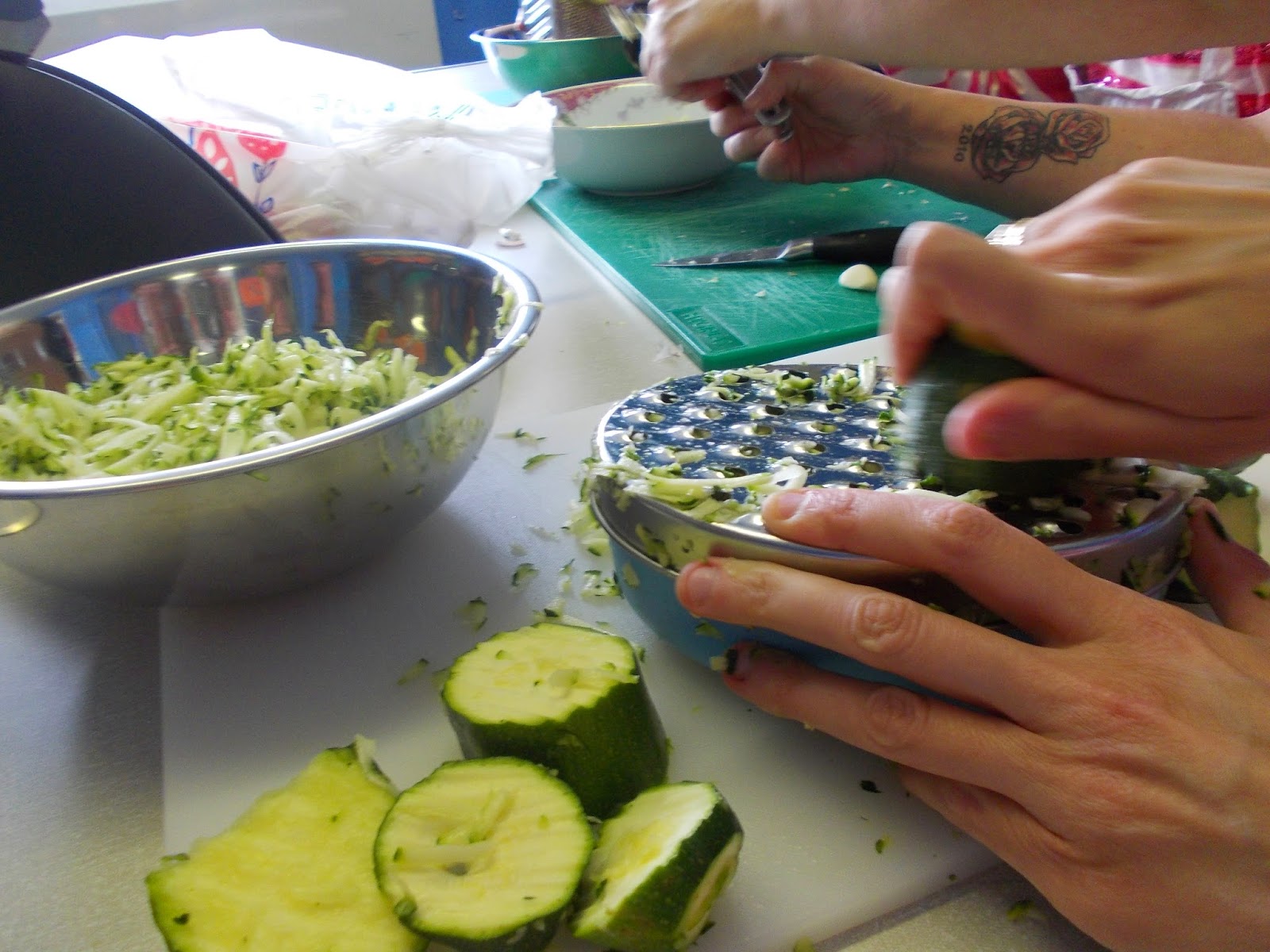 We then fried the garlic in a little oil, then added the courgette, chillie flakes and lemon zest and cooked for 3-4 minutes.
We then drained the spaghetti and added the cooked courgettes and mixed well.
We served this with parsley and some of the Grana padano. 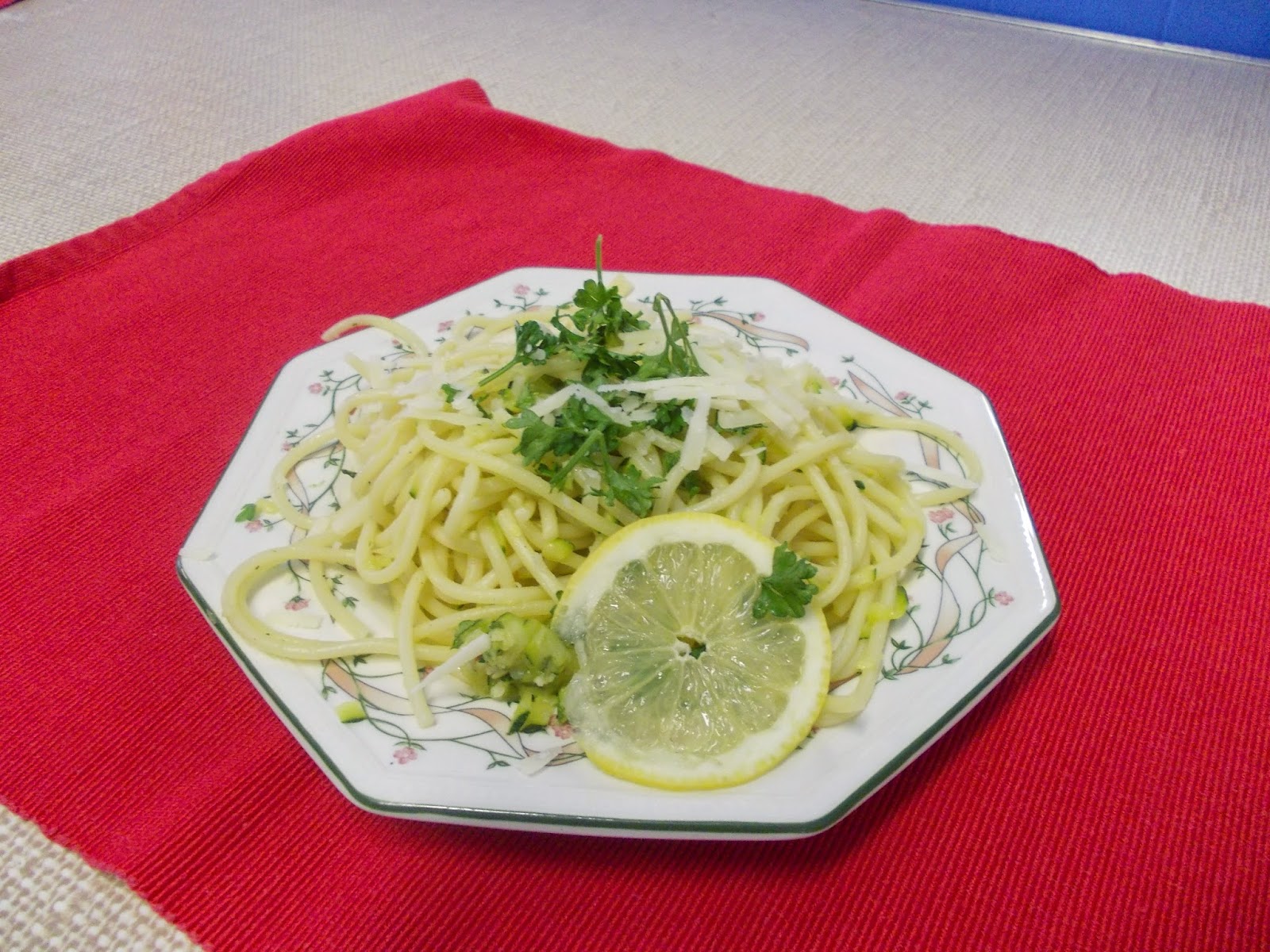 Everyone enjoyed the spaghetti and was surprised at how tasty it was for such a simple recipe.

Today the group wanted to make Prawn cocktail. When looking at recipes we saw a few using avocado and the group really liked this idea.

We did some research and found that avocado is a really good source of potassium and lots of vitamins. 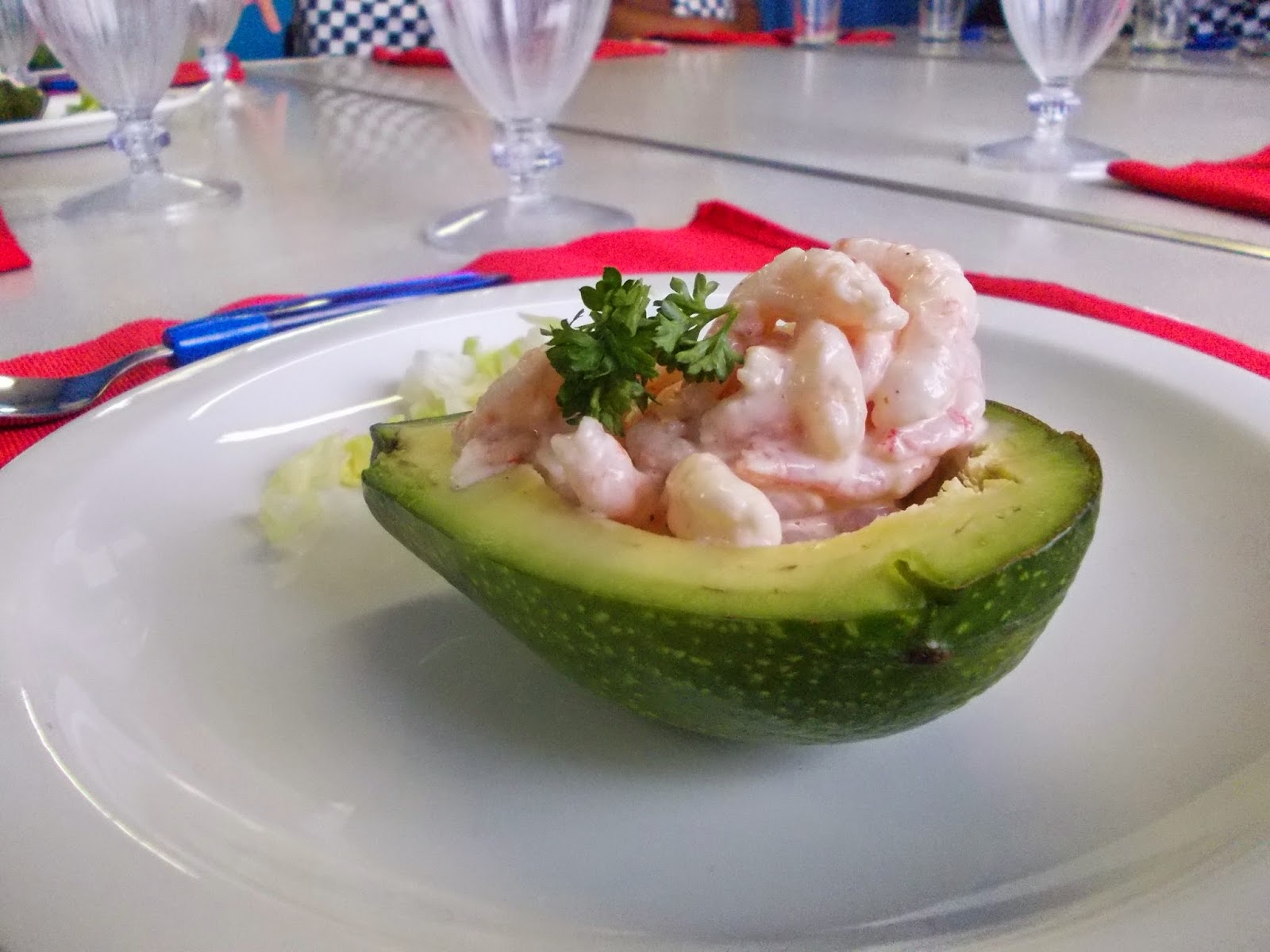 Everyone really liked the idea of putting the prawn cocktail in the avocado, so the avocado became the bowl!

The group agreed that the flavours worked well and made for a fresh, light starter.

On Saturday 17th May the Friday group attended the Windmill Gateway’s May Dance. We attended last year’s dance and everyone said they really enjoyed themselves, so when the group heard that it was going to be happening again they wanted to go.

Just like last year there was great music, tasty food, an exciting raffle and LOTS of dancing!! This year there was also the added bonus of lovely sunshine and warm weather. It was lovely to see some familiar faces as well as getting to meet some new ones. Everyone appeared to have brilliant time and said they looked forward to next year’s event.

Welcome to our revamped and renamed blog. We how you enjoy it!

The group found a recipe for light and fluffy blueberry cakes. To make twelve of these you need:

First we washed the blueberries and mixed in a bowl with the granulated sugar.

Then for the cake we put the flour in the bowl and rubbed the butter in- like you would for a crumble topping.
We then added the caster sugar and mixed.
Afterwards we made a well in the mix and added the egg. We then mixed until the ingredients became a dough.

We then divided the dough into twelve to roll into balls and put a few blueberries on top. 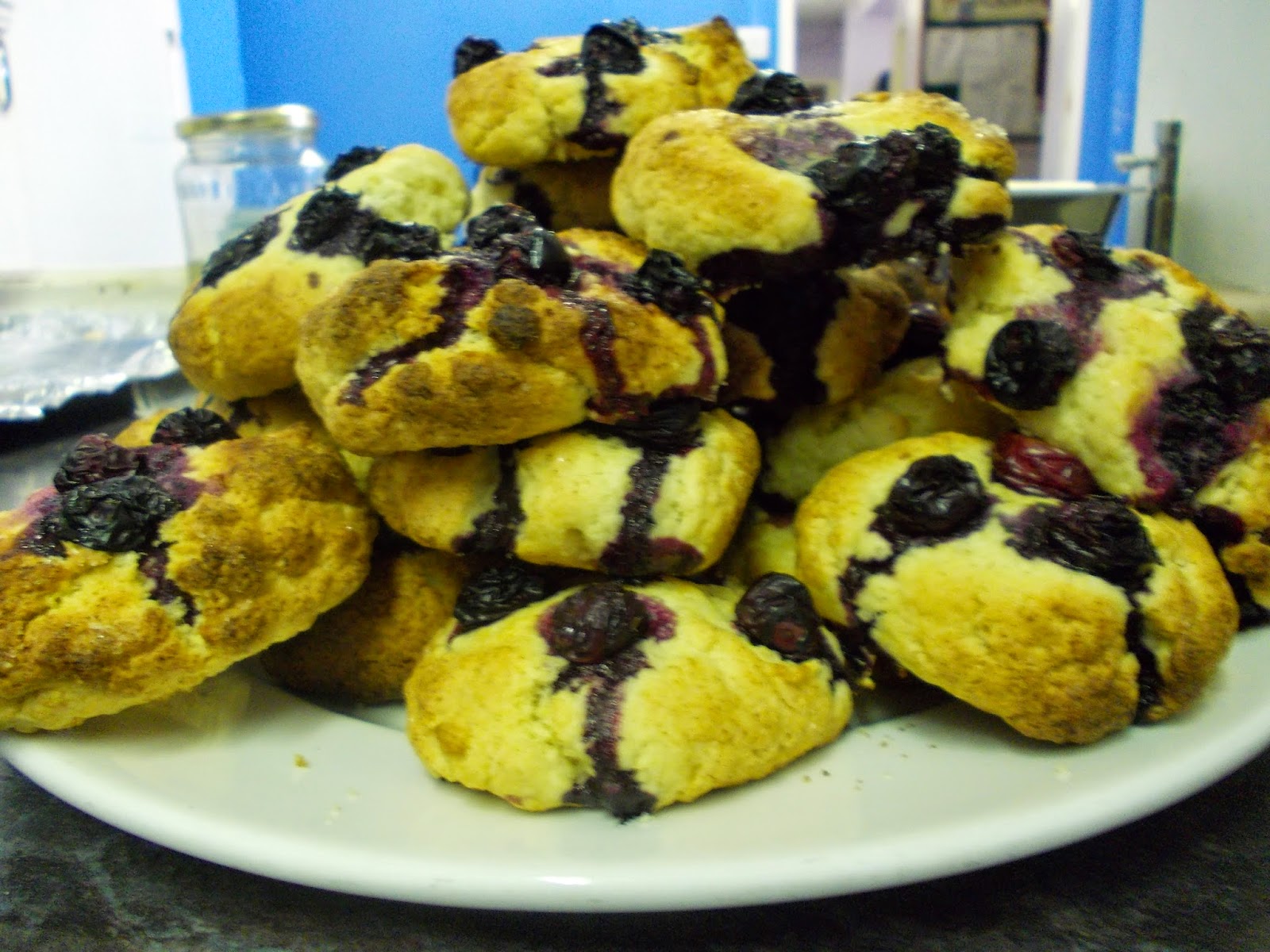 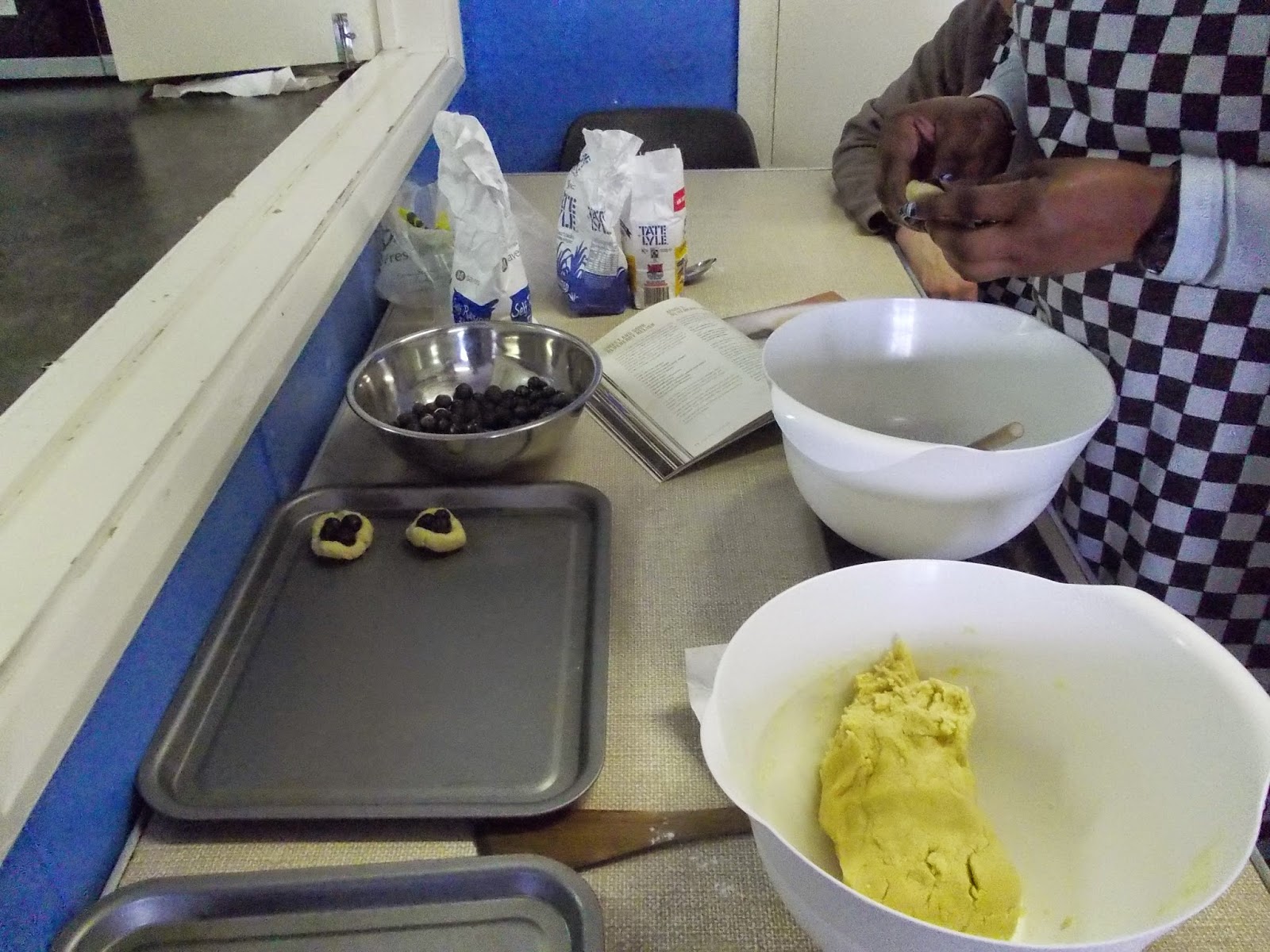 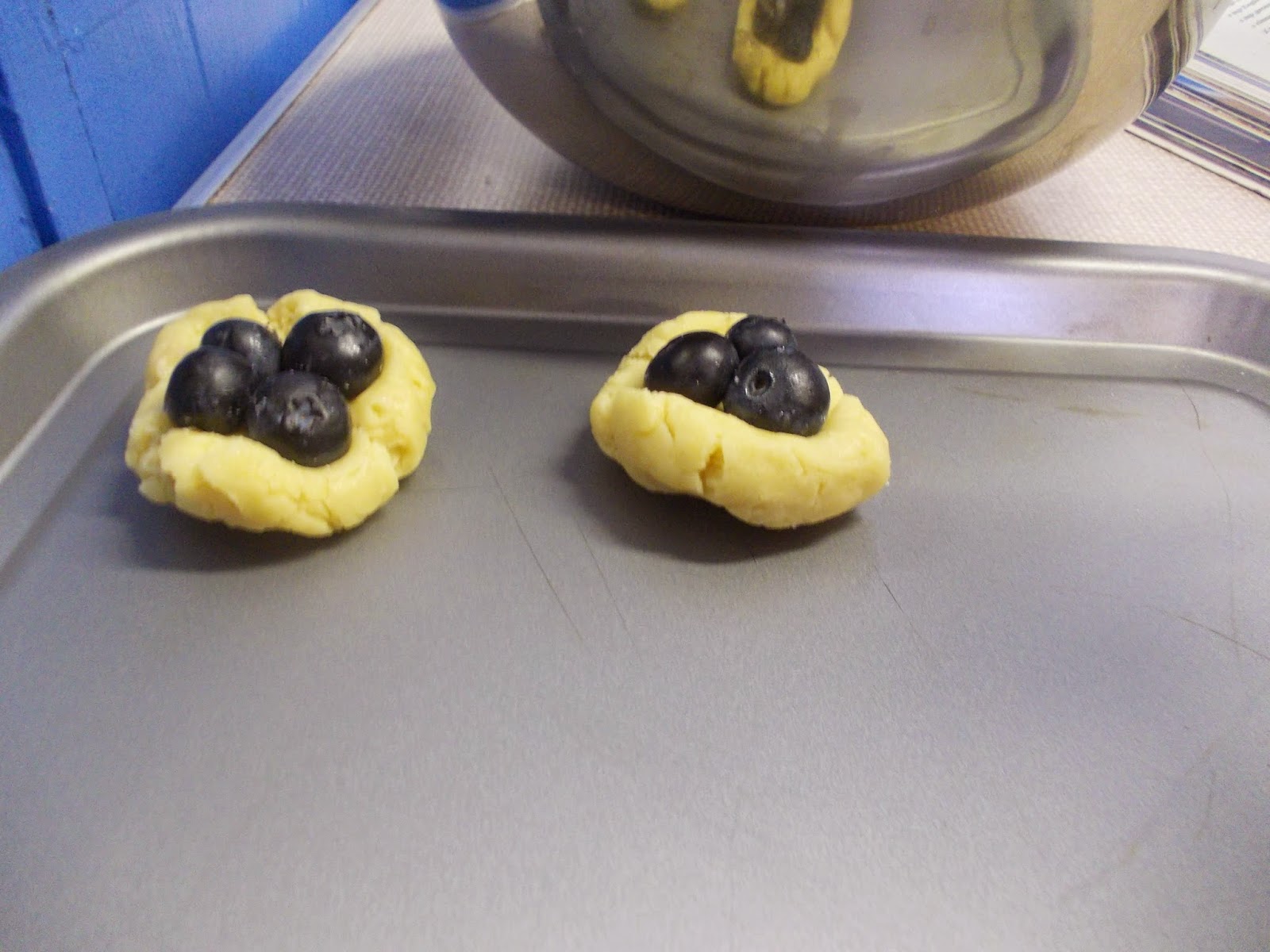 After spacing them out on the baking tray we put in the oven at 200
Degrees for about 12 minutes. 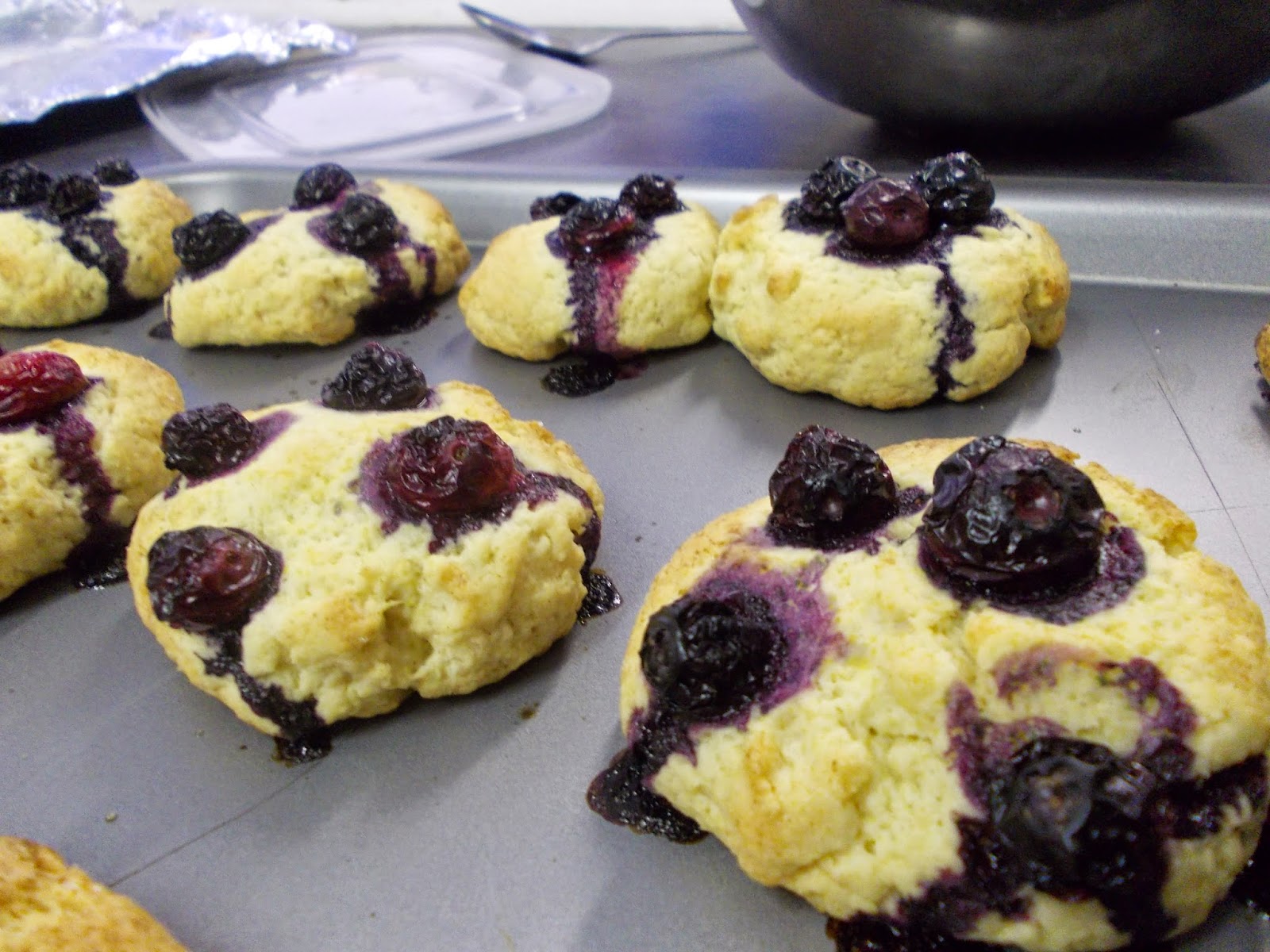 Fresh from the oven…

..And ready to eat.
They were lovely and light, which was perfect after a filling lunch.

This week the group made burgers from scratch. 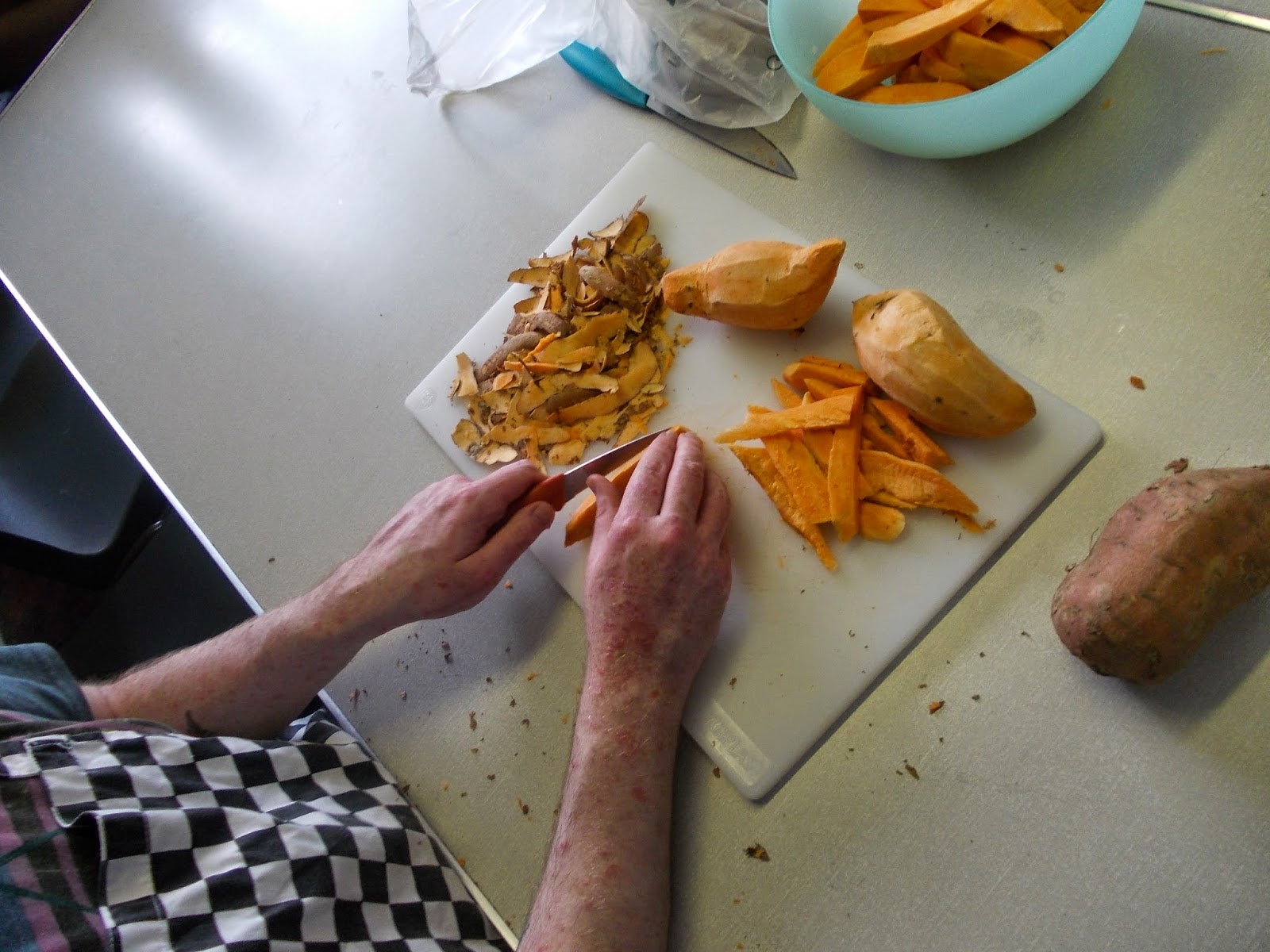 Cutting the sweet potato into chips.
When making the burgers we kept it simple, using lean beef mince, very finely diced onion, garlic and seasoning.
We made beef patties and put a cube of cheddar cheese in the center of the patty. This is so the cheese can melt in the middle of the burger as it cooks. 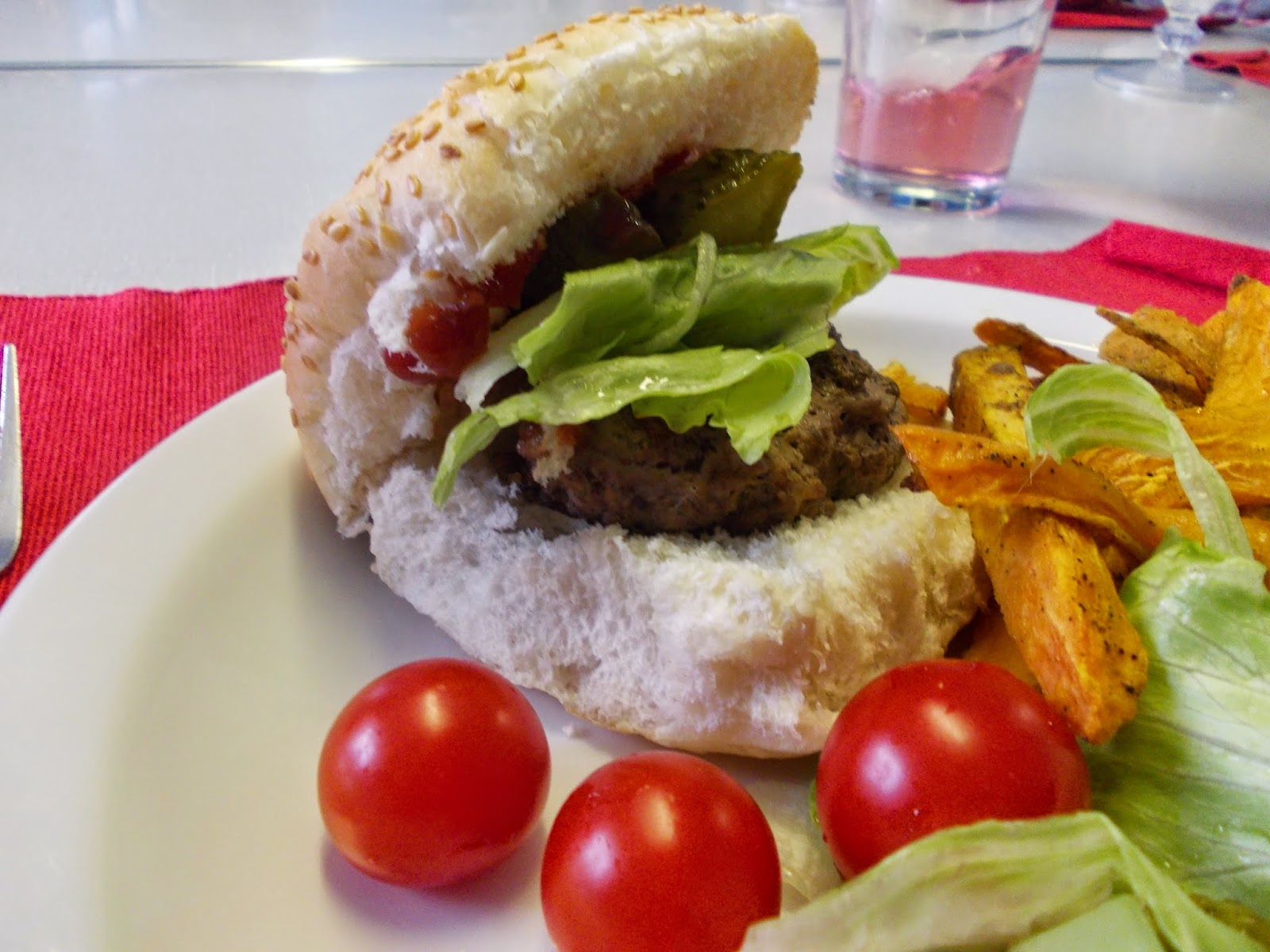 To compliment the burgers we added lettuce, tomatoes and gherkins. 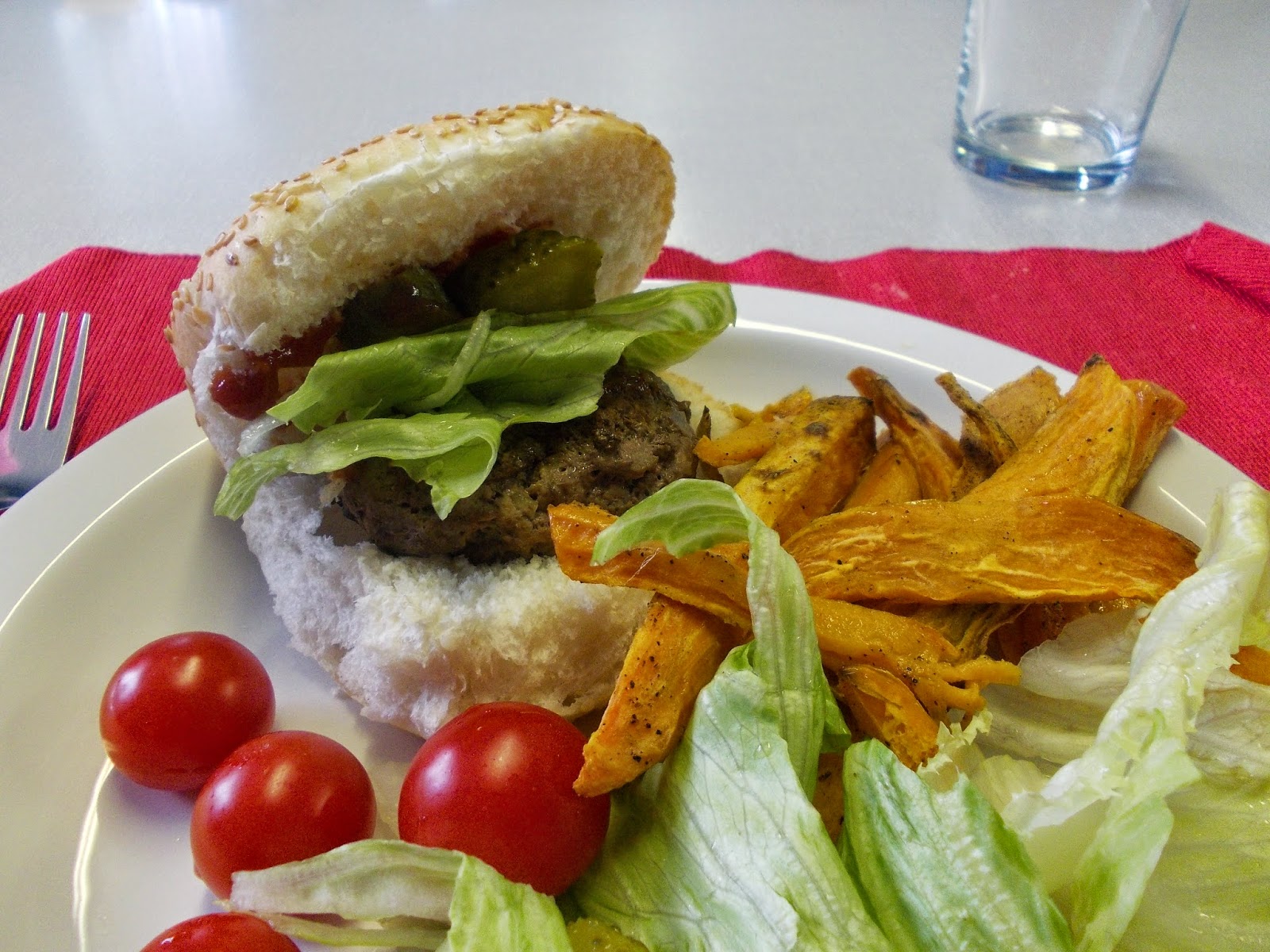